Shakudo nanako plate with three minogame carved in high relief with gold iroe. The creatures have a playful look about them and are nicely rendered. The tails in particular are well carved.  The parent’s shells have a hexagonal shape on them while the juvenile’s shell is less defined, probably to reflect its younger age. Gold soldered ground with filing on the reverse. Nicely punched nanako on the front. Mumei. Probably the work of the Goto school. 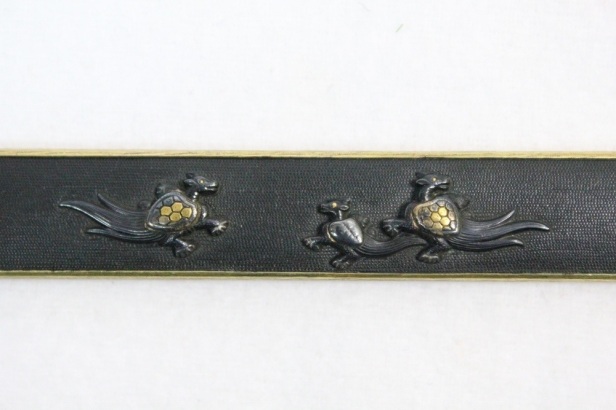 The mythological giant turtle known as the minogame 蓑亀 (or ‘straw raincoat-turtle’ due to the tail resembling a farmer’s straw coat) is regarded as a very auspicious creature in Japanese culture and has made appearances in arts, crafts, and even in modern-day popular culture.

The minogame is said to live at least 1,000 years and has a long hairy tail, which is actually seaweed and algae that have grown on its shell due to its old age. In Japanese culture, the minogame represents longevity and wisdom.

The most famous minogame is that from the legend of Urashima Taro where the creature takes Urashima to the Palace of the Dragon God after having rescued the smaller turtle (which was actually the princess Otohime) from the children who were tormenting it. 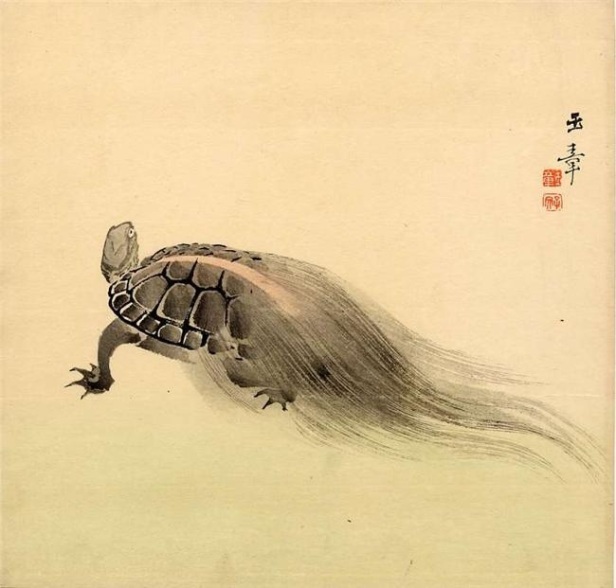