Tadatsugu (ca. 1675-1725) is thought to be of the Umetada school from Kyoto, but much of his work was as a plate maker for other artists to decorate. He did decorate some of his plates himself and this seems to be one of those cases. This example shows his finest work and is equal to pieces produced by other masters of his period. (Robert Haynes) 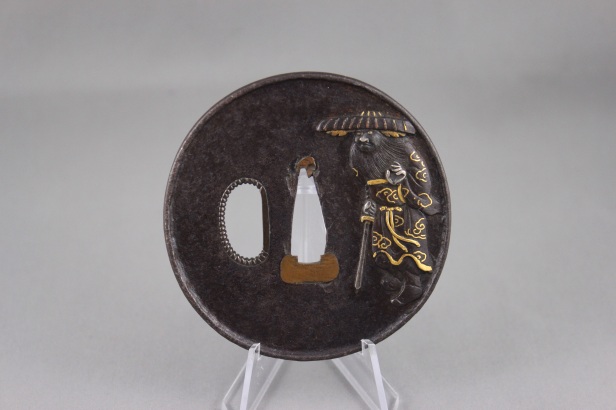 SHOKI – The Demon queller, a conspicuous figure in Japanese art. This legendary character dates back to the Chinese Tang dynasty (618-906 A.D.). He is said to have been a ghostly guardian of the Emperor Genso, to whom he revealed his history in a dream. He had been a student during the reign of Kan no Koso, but had failed at the imperial examination, and sooner than live without a degree, he had committed suicide. The Emperor Genso gave orders that he should be buried with high honors, and in gratitude his spirit had vowed to remain forever engaged in the expulsion of demons from China. The Chinese represent him as a ragged old man accompanied by a bat, symbolical of happiness, but the Japanese depict him in a martial gard with a naked sword, hunting down demons (Oni). Shoki is usually represented with a flowing beard, and sometimes is shown riding upon a Korean lion.

ONI – Generic name for devils, the representation of which in art is quite a common feature. Onis have claws, a square head with two horns, sharp teeth, and malignant eyes surmounted by big eyebrows; occasionally they wear trousers of tiger’s skin. Oni are depicted hiding in all sorts of strange places – in wells, under Shoki’s own hat, behind him, in boxes, etc., or running away as fast as their legs can carry them.